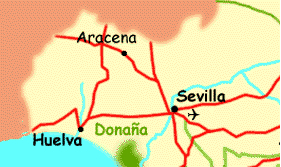 Leave Seville city centre to the West, just North of the Triana district, passing the entrance to Isla Cartuja and cross the Puente del Patroncino bridge. (Alternatively, you can leave the SE30 ring road at km 17.) The A49 motorway climbs up out of the Guadalquivir river valley offering a last look back at the city. The motorway is named ‘Autopista del Quinto Centenario’ or Five Centuries Motorway, which refers to the story of Columbus that lies ahead. The scenery is that of rolling hills and agriculture, sunflowers and wheat.

If time is not pressing, at junction 10 near Bollullos turn South towards Almonte (a small village hosting one million pilgrims each May), Doñana Nature Reserve, Matalascañas and Mazagon (and their golden sandy coast) and La Rabida and Palos de la Frontera for Columbus followers.

The Parque Nacional de Doñana is Europe’s most important wetland reserve and a major site for migrating birds.

It is an immense area – the parque (park) itself and surrounding parque natural or Entorno de Doñana (a protected buffer zone) cover 1,300 sq km in the provinces of Huelva, Sevilla and Cadiz. It is internationally recognised for its great ecological wealth. Doñana has become a key centre in the world of conservationism and is well known for its enormous variety of bird species, either permanent residents, Winter visitors from North and Central Europe or Summer visitors from Africa, including flamingos and one of the world’s largest colonies of Spanish imperial eagles.

The park comprises marismas (marshes), Mediterranean scrublands and beach sand-dunes, all a result of the delta of the Guadalquivir River, the ‘big river’ or Wada-I-Kebir, of the Moors, although having only one outlet to the sea, just below Sanlucar de Barrameda. The rest its delta has been blocked off by a huge sandbar from the mouth of the Rio Tinto, near Palos de la Frontera. Behind this natural barrier stretch the marismas.

In the 13th century, the kings of Castille set aside part of the Doñana as a royal hunting estate (coto) and later the dukes of Medina Sidonia also, one of whose duchesses, Doñana de Silva y Mendoza, building a residence hence the name. In the 18th century, Goya visited the Duchess of Alba at the Palacio de Doñana.

Adjoining areas of wetland have been dramatically reduced by drainage and conversion to farmland. The proximity of settlements has complicated the work of the park’s wildlife guardians, as near-extinct lynxes, etc, are run over by cars; straying cats and dogs kill animals in the park and birds shot by hunters – despite stringent conservation laws.

Further threats to the ecosystem are the rice-fields and other agriculture, whose run-off waters sluice pesticides into the marismas and the sulphur mines upstream, which discharge into the river.
Entrance to the park is strictly controlled. There are half-day trips with official guides or you can explore the environs of the visitors’ centres on foot.

Alternatively, you can drive 3km North of MatalascaÃ±as to the turn-off at Km29. There is an exhibition, cafe and shop selling maps and books. From the centre is a signposted 5km trail and next to it the El Acebuche lagoon, with bird hides, where you can see purple gallinules, among others.

From El Acebuche there are four-hour trips into the park run by the Cooperativa Marsimas del Rocio (Tel: +34 959 43 04 32), which must be booked in advance. Four-wheel drive vehicles can seat 21 people and guides speak some English.

There are two trips a day (excluding Mondays), at 0830 and 1500 (1700 in Summer). Full day trips can also be organised for groups, with lunch in Sanlucar de Barrameda. A typical trip will take in all three ecosystems, but the amount of exposure to each varies seasonally.
The El Rocio visitors centre is La Rocina (Tel: +34 959 44 23 40), 500m from the village and just off the MatalascaÃ±as road, offering information and a 3km trail along the lake and marshland of Charco de la Boca, which feeds into the Madres de la Marismas, with 5 bird hides for viewing purple gallinules, hoopoes, herons and Savi’s warblers, among others.

Seven kilometres from La Rocina is the Palacio del Acebran, an old hunting lodge containing exhibitions and a 1-km trail through woodland and around the small Charco del Acebran lake.
30km South of the town of Villamanrique de la Condesa is the Centro de Visitantes Jose Antonio Valverde on the northern edge of the park offering excellent bird-watching.

The Playa de Castilla beach, reached on foot East of Matalascañas, runs alongside the park boundary and although you can’t enter DoÃ±ana here, it is a beautiful, unspoilt stretch of coastline with good bird-watching.

The park can also be reached (but not entered) by taking the ferry boat across the Guadalquivir river from Sanlucar de Barrameda where there is a visitors’ centre, the Centro de Visitantes Fabrica de Hielo (Tel: +34 956 38 16 35). The Real Fernando boat runs daily (except in January) from Sanlucar for 13km up the Guadalquivir river, stopping in a few places for guided walks into the park. It’s advisable to book in advance, especially during Summer and holidays.

About Homes and Fincas

Living in the Algarve